First show done and dusted. Oh what a night! It was a 16 hour day and completely exhausting, but the energy in the room at the end of the event made it so worthwhile.

Arriving at the SS&A Club in Albury, we mounted the footpath with the Bertha Bus (name approval pending). If that site didn’t draw attention, I have no idea what would. We had seriously underestimated the effort required for setting up the event. The twelve of us cracked into unloading the never-ending array of boxes and suitcases and getting them up two sets of stairs. I’ll have buns of steel by the end of this. It was chaotic fun as we 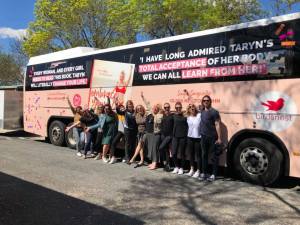 problem solved on the fly. The consideration the BIM team had put in during the planning stage was impressive. We had stickers for each person to put on the part of the body they were learning to love; signs to hold up for photos with phrases such as ‘My body is magical’, ‘I have embraced’ & the ever popular ‘Fuck Off! I’m Perfect!’; and media walls covered in images of donuts, ‘Embrace Yourself’ logos and, and my favourite – the wall of vulva cookies. Choosing where to set each one up, I uttered a sentence I never expected to say “I feel like donuts and vulvas go better together.”

Four and a half hours later, the room was looking fabulous and we had fifteen minutes to scoff dinner while standing in a row along the edge of the stage. Australian Story from 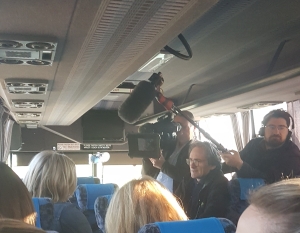 the ABC had been following Taryn for days, capturing all aspects of her life and the tour for an upcoming special. I’d liaised with them several times during the day to arrange the different shots they needed. Yes, I’m a media expert now! Just another skill for the resume, right?  The VIP event with Taryn kicked off a 6 pm and I had an awkward tussle with the filming crew over the volume of the music, which was going to interfere with their shots, but I insisted it needed to be loud for the atmosphere. I stood my ground for the benefit of our treasured VIP sponsors.

I was director of first impressions on the front door, handing out drink tickets and explaining the stickers for the ladies body parts. The crowds filled the foyer and lines snaked down the stairwell. The anticipation before we opened the doors was electric and I absolutely thrived on it. I loved chatting with the women who were shaking with excitement about meeting Taryn because I know exactly how they felt. I had a shake my head in wonder moment, remembering how worked up I was to meet her not even two years ago (and the blog I wrote before I even saw the movie!) and now I was on tour with her, calling her Taz.

I think it’s easy to feel like you are alone in your feelings at times. Nobody else hates their body the same as me. Nobody else stands in front of the mirror and cries at their reflection. Nobody else contorts their bodies to avoid a lover’s hand skimming their lumpy belly. The magic of Embrace and Taryn is she gave voice to the inner fears, made us laugh about the absurdity of them and we all had a collective ‘me too’ moment. There is safety in solidarity. The simple act of telling women to put stickers on the parts of their body they are learning to love, gave all of us permission to laugh at it. I put one on my tummy and every time a guest did the same I’d say ‘Look we are tummy sisters’ and we’d laugh and frequently hug. It broke barriers and created compassion and love.

The whole event was amazing. Ellen Briggs was hilarious and the fashion show was full of joy. People lined up for ages to buy Taryn’s book and get it signed. I took photos of 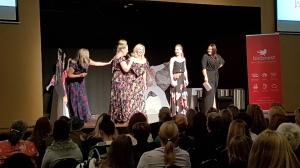 friends hugging in front of the media walls. All 300 of us danced in the aisles in a frenzy of happiness. However, the emotion that is staying with me today, bringing a lump to my throat as I type this, was the LOVE. It’s cliche, I know. But that room was magical with the raw, open love we all ended up feeling for each other. Bring on 6 more events – I can’t get enough of it!

To read more blogs from the Embrace Yourself Tour – click here